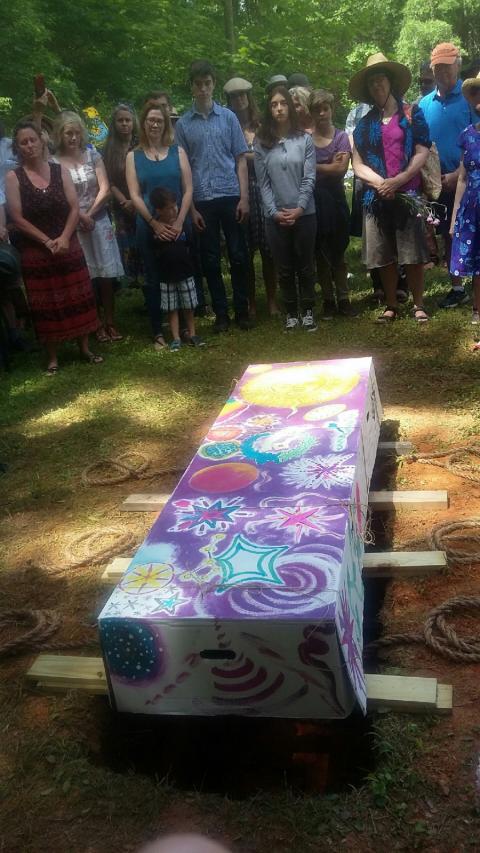 While this little blog post will certainly never make The New York Times, the obituary of Barbara Beye Lorie did.

Barbara was just one heck of a human being and her life story one of unique drive and determination.  I came in to be a part of her DEATH story, and I wanted to share that here because there are some pretty powerful LIFE lessons for all of us.

I only got to meet her once before her death.  I had had several conversations with her son, Doug, and his wife Yvonne and they were adamant, like Barbara, about having a home funeral before a natural burial on the community-owned property.  When we talked, Barbara wanted to know more about what would happen during her home funeral.  As I explained how I would guide the family through the various steps, I got to the part about anointing her body with essential oils and her eyes lit up.  Oh, that moment when you are so encouraged in heart and united in love!  Lesson #1:  get your planning done and tell all your family and friends what you want so they aren't left to guess on one of the hardest days of their lives.

I loved poring through all the journal entries on Barbara's CaringBridge site.  It helped me learn more about this woman I was going to help family and friends prepare for her last journey (or Great Departure as her funeral program would later state).  One story stood out among all the others.  And it's the reason for the title of this piece.

Imagine teaching English in high school back in the 60's.  Just typing that sentence reminded me of how hard a task that was for our teachers then with all the social unrest and teenage angst.  One former student of Barbara's remembered the day she came into the classroom and announced to her students that they were not going to read "Julius Caesar" as required.  She then threw the book out of the window and passed out copies of  Eldridge Cleaver's "Soul on Ice!"  The student recalled how it was a moment..."when I saw an adult speak - no, act - truth to power in a language only an adolescent could understand.  Wow!  That was THE defining moment in high school for me, the moment in which I fully understood that we need not be prisoners to the system in which we had, through upbringing and society, enslaved ourselves.  Thank you for that."  Lesson #2:  Life is short and flies by so fast, much like that Julius Caesar book out the window!?  Make sure you read relevant and timely literature.

And speaking of high-flying...Barbara lived in an intentional community called Blue Heron Farm.  While out searching for land to buy, the core community became enchanted when a blue heron flew over their heads.  Talk about your perfect totem.  This great bird carries such rich meaning and medicine!  The message is self-determination and self-reliance, which Barbara had in spades.  The heron totem puts the focus on resourcefulness which I witnessed firsthand throughout the Blue Heron Farm community as Barbara's family and friends worked together to fulfill her final wishes.  Lesson #3:  Surround yourself with loved ones who encourage and support you not only in life but in death.